Stephen Tulloch comes in at No. 63 on NFL Top 100 Players list 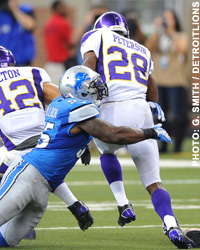 Stephen Tulloch is humbled to join teammate Matthew Stafford on the NFL Network’s Top 100 players list, coming in at No. 63

Add linebacker Stephen Tulloch to the list of Lions players who are considered among the top 100 in the NFL by their peers.Tulloch checks in at No. 63 on the NFL Network’s Top 100 Players list. This is the third year current NFL players have voted to determine the top 100 players in the league.

“Players vote you on this list,” said Tulloch. “To have the respect of my peers in the NFL looking at me as a player to be on such a list like is humble for me because I’ll never forget where I started and how the odds were always against me.

Click here to assign a widget to this area.